As a teacher, I’ve always found it easy to define the term force. Ready? It is a push or a pull. Identifying forces in real life, though, can a bit more tricky.

Of course there are the obvious ones. Push open a door, and you’ve applied a force to it. Throw a ball, ditto. Pull yourself up a rope, lift a fork laden with pasta to your mouth, or punch someone in the kidney: all forces.

But forces can, of course, get a lot more complicated. For example: if you push down on the gas pedal, that’s an obvious force, but what force pushes the car forward? Of course there’s an engine and the engine spins the wheels, but what is actually pushing the car? Not the wheels, exactly — we’ll have to get back to that one.

Or how about this: throw that imaginary ball up in the air again. Why does it keep going after it leaves your hand? Is there a force pushing it? These are exactly the kinds of questions that Newton’s Laws answered. Once we had them, we were able to understand much more about the forces at work in the world around us.

For example, by following up on Newton’s Laws, we’ve since learned that every force you could possibly identify — like the push of a hand on a door, the pull between two magnets, or the force pulling the moon in a circle around the Earth — is actually an example of one of the four fundamental forces: the gravitational force, the electromagnetic force, the strong force, and the weak force.

The electromagnetic force is the one that makes electricity flow through a wire and causes magnets to attract or repel each other. It too will get its own chapter, and I’m going to tell you right now that it’s a doozy.

The strong force is the strongest of the four forces and also the most uncreatively named. If you remember anything about high school chemistry, you’ll know that the nucleus of an atom consists of protons and neutrons; the strong force is what holds the particles in the neucleus together.

The weak force is a bit harder to describe, but what it does is cause radioactive decay, which is when certain particles spontaneously turn into other particles and release radioactive emissions. The saddest part about the weak force, aside from the fact that it is not nearly as interesting as the other three, is that it really got stiffed in the name department, especially since it is actually not the weakest of the four forces — gravity is.

(If you still feel a bit confused about the strong and the weak force, don’t worry, because I’ve got a chapter about those, too. It’s called Atomic Physics, and it’s got explosions and intrigue and these awesome little things called neutrinos. So stick around.)

In the meantime, I sincerely hope that you are confused about something else at the moment as well. If you’ve been reading carefully, you’ve noticed that although I said that you exert a force on a door when you push it with your hand, I also said that all forces are secretly one of the four fundamental forces. You might have looked down at your hand and thought the following: “I’m not holding any magnets, so it couldn’t be the electromagnetic force… I’m not a planet, so I don’t think I’m exerting a gravitational force on the door… And I still don’t really know what the strong or weak forces are, but it doesn’t sound like I’m doing either of those, either.” You’re partially right. But here’s another one of those moments when you can gain more insight into how fascinating the world looks to a physicist.

Think back once more to high school chemistry. Even if you can’t remember the makeup of an atomic nucleus, you probably know that an atom is generally composed of a solid, positively-charged center orbited by tiny, negatively-charged particles called electrons. In other words, every atom is surrounded by a little sphere of negative charge. And since all of the objects around you are made up of atoms, including your own body, then everything is actually lined with electrons. And the very first lesson on electromagnetism states that just like the north pole of a magnet repels other magnets’ north poles, electrons repel other electrons.

At some point, as you move your hand forward, the force gets strong enough to push the door open. In the meantime, you have never actually “touched” the door — at least, not in the way that you might have thought. Even the sensation of touch that you felt was actually the result of electrochemical signals moving through your body — nerves that are firing because of the very same electromagnetic interactions that got the door open, but not because of “direct” contact. 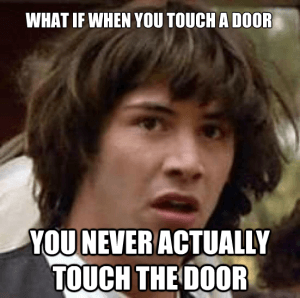 You can extend this reasoning to cover every force you could possibly think of. For example, solid objects are also held together by electromagnetic forces. You might better understand this idea after reading the chapter on Atomic Physics, but for now: extra electrons orbiting one atom become attracted to the protons of another atom, and so on until the atoms have been grouped together into molecules, and the molecules have been connected into chains or solid structures.

When you pull something with a rope, therefore, the rope stays together because of all of these attractive forces. And your hand is able to grip the rope because little bumps on your skin are unable to move past the bumps on the rope, because both sets of bumps are lined with electrons. In fact, as you might have guessed, almost all of the large-scale forces that we make use of in everyday life are manifestations of the electromagnetic force. Gravity makes things fall and causes the tides, and the strong and weak forces keep things trucking down at the subatomic level; everything else is due to the interactions between electrons and protons.

The nice thing about classical mechanics, though, is that we usually don’t have to worry about whether we’re actually pushing on a door or just hovering nearby and zapping it with invisible electromagnetic radiation. It turns out that mathematically, it’s perfectly acceptable to take all of those billions of interactions, add them up into one big force, and pretend that all that talk of subatomic particles was just a bad dream. Newton’s Laws work perfectly well when dealing with the fundamental forces on their own, too, but to start out with, we’re going to consider mostly macro-sized situations.